Pictures and More from the Los Angeles Linsanity Premiere

The second of our two write-ups from the September 19th Los Angeles Premiere: 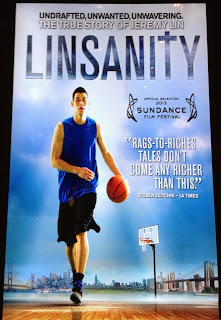 As I sit down writing this, I am gleefully reminded of my recent foray into Hollywood’s glitz and glamour for just one evening as a lucky attendee at the Los Angeles red carpet premiere of Linsanity, the documentary film of Jeremy Lin, held on Thursday, September 19, 2013 at the TLC (formerly Mann’s) Chinese Theater.

It’s 6 p.m. when we arrive at the venue, and in usual Tinseltown fashion, the paparazzi have staked their claim on every prime spot near the red carpet – Access Hollywood, The Hollywood Reporter, and a dozen or so media outlets. 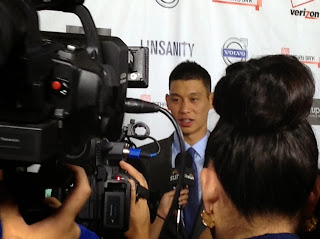 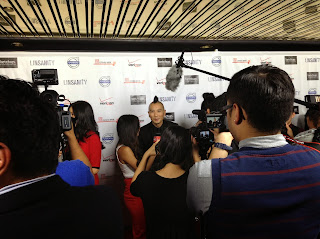 While other invited guests mill about snapping selfies and waiting for Jeremy, we take some photos of ourselves too, but then in a blink of an eye, we are interrupted by a surge of flashes setting off at the red carpet.  We see Mike D’Antoni (former New York Knicks and current LA Lakers coach) and the lovely Lisa Ling flashing smiles at the press.  Director Evan Jackson Leong is spotted sporting an impressive mohawk alongside some presumably well-known folks in the business.  Jeremy Lin’s immediate family soon enters the red carpet (mom, dad, brothers), and so does Jeremy, towering above everyone else, and it’s a zoo here.  His presence is an obvious spectacle, but his demeanor is laid back.  He moves across the red carpet accepting every interview in the circuit with poise (almost in back and forth motion ensuring he has indulged everyone), and so it isn’t until after nearly an hour of gawking that we finally decide to retreat to the theater.

Linsanity wholly meets, if not exceeds, my expectations.  It's a great underdog story with filming that actually pre-dates his phenomenal 2012 run with the Knicks.  While the film touches upon the many aspects of Jeremy Lin (a Harvard grad, his achievements and hurdles to becoming a pro athlete, an Asian American in the NBA enduring racism, and his walk in the Christian faith), I am most touched by the Jeremy who flourishes on the court not just by his pure talent and intense love for the game but by his iron clad faith in God.  Whether or not you’re a believer, there is no denying that Jeremy walks his talk.  His proclamation that he plays for an audience of one (God) is indication that his devotion to God undeniably presides over family and career.

Through the end, you can’t help but to just like this guy – to see Jeremy marvel endlessly at a Homedics fountain at the (presumably) local Target is endearing, and to discover that his penchant for the piano in his formative years was virtually non-existent as he skates through three consecutive recitals on the same song shows he’s just like the rest of us (although how he managed that feat under the watchful gaze of any piano teacher alone is impressive and may actually further prove his brilliance!).

After the film, Q&A panel discussion, and even a raffle of a couple of Jeremy’s personal possessions (a childhood blankie and remember that Homedics fountain?), the official event finally wraps up.  For some fortunate folks, the evening has just begun at the after-party is at the famed Roosevelt Hotel right across the street.  In the end, we mostly give in to our conscience that, as uninvited guests to the after-party, it would be better to just get the parking validated and cap the evening off with Mel’s Diner on the nearby Sunset Strip.  In our fancy outfits with a burger, a sundae, and smiles to boot, we almost feel like celebrities opting for that piece of simplicity after a big night of seeing luminaries. Not a bad evening at all for a first ever, red carpet premiere.
Posted by ForgeBond at 3:55 PM