Start of an Era! Jeremy Lin Signs with the Golden State Warriors!!! 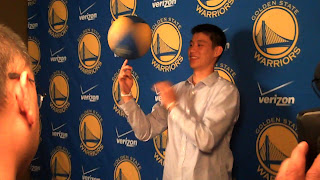 It took 53 years but there is finally another full Asian American on an NBA team! Wat Misaka a 2nd generation Japanese American was the first to play in the league. After leading the University of Utah to the 1944 NCAA and 1947 NIT Championships, the 5'7" point guard was drafted by the New York Knicks and had a short stint in the NBA. Read the Wat Misaka Story to find out more.
Now we have Jeremy Lin, a 2nd generation Taiwanese American in the league! I hesitate to say it but I feel Jeremy Lin is akin to a modern day Jackie Robinson, albeit on a much softer scale . He has and will continue to face stereotyping and racial obstacles. However, like Robinson, Lin has the personal character and athletic talent to overcome it all and become a huge success in his sport.
Here is part of his first Press Conference as a Golden State Warrior: Interview#1
Posted by JLinfan#1 at 9:54 PM